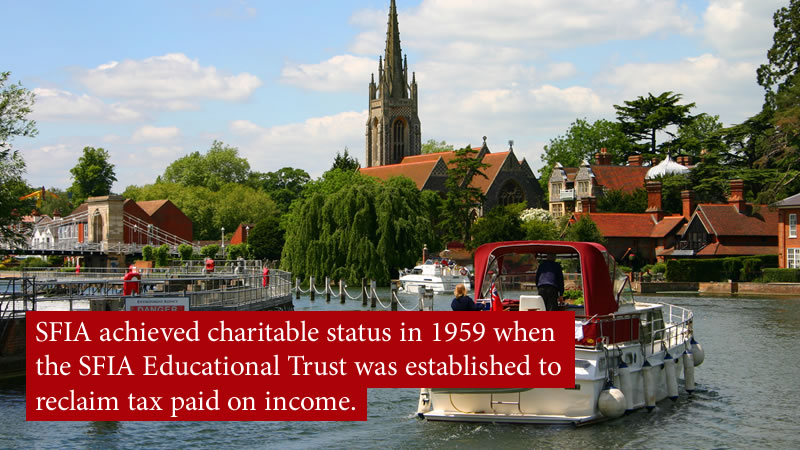 SFIA achieved charitable status in 1959 when the SFIA Educational Trust was established to reclaim tax paid on income. This money was used to fund private school education for gifted children from families who could not afford fees.

A general fund was created for members where contributions could be made free of tax in return for guaranteed future school fees – something that later became the standard method of paying school fees, being adopted by financial institutions and professionals across the country.

In 1975, the SFIA Trust Limited was set up and managed a fund that far exceeded all competing funds combined, being contracted to pay over £500 million in school fees and maintaining the company’s track record of success.

Though changes to tax law and legislation slowed down new business to the trust fund by 1996, the School Fees Insurance Agency Limited was purchased by the current directors to take up the challenge of the new financial climate.

In 2002, SFIA was registered and authorised to offer independent advice by the Financial Services Authority (FSA), and in 2005 the Tax Planning Division was formed to extend the services provided to higher-earning clients – a function that now offers a vast array of bespoke tax solutions.

When the FSA was replaced by the Financial Conduct Authority (FCA), SFIA continued to evolve, and we now regularly conduct health checks, as well as monitor clients’ financial situations, to ensure the most appropriate advice and services are delivered.

To download our complimentary financial magazine simply register your name and email address below.

The material on the site is the copyright material of SFIA. You may not copy, reproduce, republish, disassemble, decompile, reverse engineer, download, post, broadcast, transmit, make available to the public or otherwise use SFIA’s content in any way except for your own personal, non-commercial use. This includes but is not limited to all individual fund manager data such as rankings of fund managers and ratings of fund managers. SFIA does not accept any liability for your reliance upon, or any errors or omissions. Any other use of SFIA’s content requires the prior written permission of SFIA.

SFIA is authorised and regulated by the Financial Conduct Authority no: 662963 and is bound by its rules.

Your home may be repossessed if you do not keep up repayments on your mortgage. Will writing is not regulated by the Financial Conduct Authority.